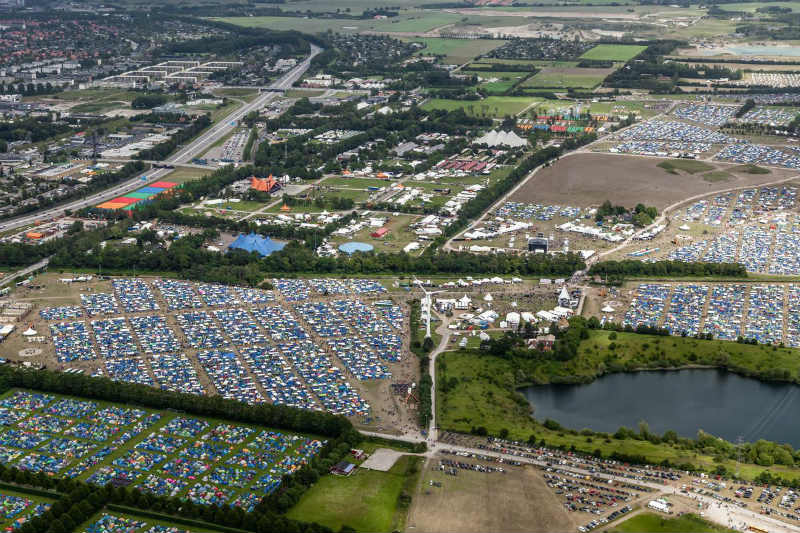 With less than three hours into the opening of Roskilde Festival 2016 the 130 000 ticket holders have a schedule that is packed with everything a person could possibly need to have a good time.

So, take a deep breath – or why not two – and enter the 46th edition of the iconic Roskilde Festival. Since the birth in 1971 the non-profit organization The Roskilde Festival Charity Society has donated more than 270 million DKK to humanitarian and cultural initiatives and this engagement runs throughout all activities during the eight days. This years theme is called ”Equality 2016: Stand Up for Your Rights” and for instance on Tuesday the 28th Edward Snowden will be participating live on satellite link from Moscow.

The focus on working with sustainability gets more creative year by year and this seems to attract many visitors, in 2015 the festival found that ninety-four percent of festival-goers expressed that it was very important to them that Roskilde Festival addresses the issues. And with an area covering 2.500.000 m² it’s a truly ambitious project.

This year 183 artists from more than 30 countries will be playing and most of them actually doing their Roskilde stage debut. So what are the must see acts?

When the main days kick off on Wednesday California is represented by thrash metal band Slayer and rocking Red Hot Chili Peppers. Neither one really needs any introduction but Slayer formed in 1983 climbed as high as to be counted as one of the Big Four and RHCP, not only making music history but also supporting many environmental causes, in June released their eleventh studio album ”The Getaway”.

Thursday is kind of an odd day since many of the best acts been placed here and honestly some of them with really bad playtimes. Swedish success story rapper Silvana Imam will fight against the one o’clock slot but considering the 2016 released ”Naturkraft” the genius of Imam will knock it out of the park. Grammy-nominee Elle King with debut album ”Love Stuff” from 2015 keep drawing listeners while veterans Destroyer got really good reviews on their tenth studio album ”Poison Season”, also released last year. Bouncing on the evening popular hip hop duo Macklemore & Ryan Lewis with faithful fans and new album ”This Unruly Mess I’ve Made”. It’s all good but frankly what we’re waiting for is PJ Harvey – five years after ”Let England Shake” the ninth studio album ”The Hop Six Demolition Project” arrived in April. Harvey drew inspiration from public housing projects misused leading to social segregation and she went to Washington and pissed off a lot of politicians.

It’s been a long while since the latest record was realest, but Tenacious D will always be forgiven. Especially since making just two international festival gigs this summer, booked first for Roskilde Festival and following Swedish Bråvalla Festival. The slot 00.30 will make a huge happy crowd.

What to spend Friday on is basically Neil Young and Promise of the Real. Just like that. But remember, the festival is bursting with other activities also worth spending some time checking out.

Danko Jones from Canada joins the festival on Saturday to many people’s joy and English The Last Shadow Puppets with new album out ”Everything You’ve Come To Expect” is expected a large audience. Forget about lawsuits and box sets, New Order will always be one of the most important and groundbreaking bands in the synth era. How sensation Sturgill Simpson got the bad timeslot 18.00 no one will ever understand so set your alarm clocks because this is a musician not to miss. Mixing bluegrass, rock, country and all more you can think about makes an unusual and cool sound making Sturgills third album ”A Sailor’s Guide To Earth” a 2016 hit record.

The most important thing for festival-goers not to miss? Despite being the end of June and beginning of July Roskilde follows the rules of the Nordic climate – meaning anything goes – so bring thick sweaters, shorts, bathing cloths and raincoats.